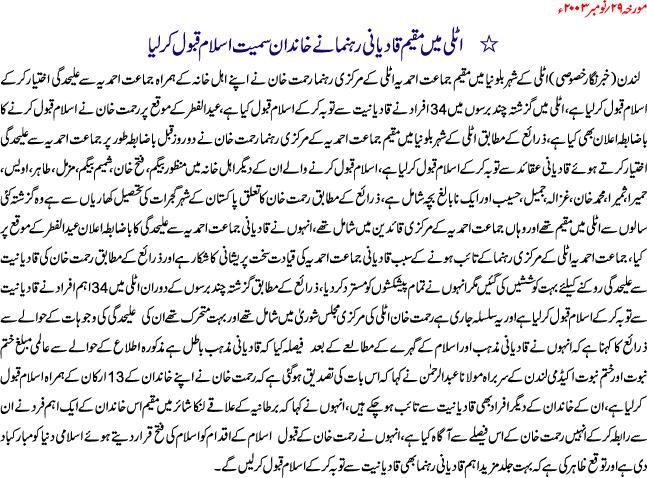 According to sources, two days back Rehmat Khan, resident of Italian city of Bologna, formally denounced Ahmadiyya Jamaat and embraced Islam. Among the people who embraced Islam include other family members, Manzoor Begum, Fatah Khan, Shamim Begum, Muzammil, Tahir, Owais, Humaira, Sameera, Mohammed Khan, Ghazala, Jameel, Haseeb and one young boy. According to sources Rehmat Khan belongs to the Pakistani city of Gujrat, Tehsil Kharian. He has been in Italy for the last several years and was among the central leaders of Jamaat Ahmadiyya there. He formally announced his seperation from Jamaat on the occasion of Eid-ul-Fitr. Due the denunciation of Ahmadiyyat from a central leader of Jamaat, the leadership of Qadiani Jamaat Ahmadiyya is most worried and according to sources, several attempts were made to stop the exodus of Rehmat Khan from Qadianiyat, but he rejected all proppositions.

According to sources, during the last few years 34 important persons have Qadianiyat and embraced Islam, and this trend is continuing. Rehmat Khan was a member of the central consultative body of Italy (Jamaat) and very active. Regarding the reasons for his exodus, sources say that he took the decision that Qadiani religion is false after thorough study of Qadianism and Islam.

Regarding this story, international preacher of Khatme Nabuwwat  and the leader of Khatme Nabuwwat Academy London, Maulana Abdur Rehman said that this is confirmed that Rehmat Khan along with 13 members of his family have embraced Islam. Other members of his family have also denounced Qadianism. He said that an important member of this family living in Lancashire in UK called him and informed him of the decision of Rehmat Khan. He declared Rehmat Khan's step of embracing Islam as a victory of Islam and congratulated the Islamic world. He expressed hope that soon other important qadiani leaders would also denounce qadianiyat and embrace Islam.