In the name of Allah, the One & Only. His Love and Peace be upon Syedna Muhamaad, after Whom there is no Prophet and upon His Family & Companions

Lo! Those who disbelieve, and die while they are disbelievers; on them is the CURSE of ALLAH and of ANGELS and of the whole MANKIND. (alQuran 2:161)

REPLY TO THE CHALLENGE OF MUBAHILA 1997

Ever since your Friday sermon of 10th January '97, your devotees are repeatedly sending letters/emails challenging me to accept this renewed challenge of Mubahila and in the same breath accusing me of running away from this challenge. Amazing!! They state that running away from this challenge is my defeat and to accept it is my destruction. Life and Death is of course in the hands of Allah. Who will die when, only Allah knows. But not surprisingly they are all singing the same tune, since all of them have been fed the same lies.

I have heard your address 10th January '97 over the internet in which once again you have labelled the entire Muslim Ummah as DISBELIEVERS and LIARS. Though I have yet to recieve formally a copy of the challenge in my name or in the name of Anti-Ahmadiyya Movement, but since you have addressed all ENEMIES of AHMADIYYAT and since your devoted followers are constantly challenging and accusing me in the same breath of running away from this challenge, I deem it fit to take the lead and INFORM YOU OF MY ACCEPTANCE of this challenge and at the same time point out some facts. I feel sorry for your ignorant followers whom you have deceived so successfully for such a long time into believing that:

General Zia-ul-Haq had died as a result of the Curses of Qadianis/Ahmadis during the previous challenge of 1988.None of the Muslims could dare to accept your Challenge in 1988.Muslims are scared of doing Mubahila with you.Muslims will once again run away from this Challenge of Mubahila of 1997.

I wish they would see the other side of the picture.

Now I would beg you to bear with me while I relate some facts. I am sure you are aware of them but your simple-minded Qadianis may benefit from them.

While many learned scholars had accepted this Challenge, my teacher Syed Abdul Hafeez Shah, not only accepted the Challenge of Mubahila but wrote to you that if you are willing, he is prepared to come to London to do face to face Mubahila with you. We had a prolonged correspondence with Mr. Rasheed Ahmad Chawdhary, Secretary Press and Publiction Desk of Ahmadiyya Movement Headquarter in London who as per your instructions made fun of our proposal. He wrote:

"Mubahila is to supplicate earnestly to God so that He may show the difference between the truthful and the liar and since God is present everywhere in the Universe, He is capable of afflicting us of your curses here in London and afflict you of our curses whereever you are." (Letter of Rasheed Chawdhary dated 23rd Dec 1988, published in 2 in 1 by Syed Abdul Hafeez Shah)

My dear Mr. Mirza Tahir Ahmad! When we could not convince you in any way to sit together for Mubahila, we decided to create an awareness campaign by the name of Anti-Ahmadiyya Movement. The purpose was to put Muslims in every corner of the earth on their guard against the pious fraud of Ahmadiyya Movement in the name of Islam and to show Qadianis the real face of Mirza Ghulam Ahmad. Today by the Grace of Allah Anti-Ahmadiyya literature is available in more than 13 languages. I am sure, Mirza Tahir, you are fully aware of the impact of our work. No wonder you remembered me with names like BAD ZAAT (wicked), KHABEES, and MANHOOS in your Jalsa Salana address of 1994. No doubt I am proving very very Manhoos for your Movement.

In August 1994 we Challenged you for a Mubahila. We offered to come to AlFazl Mosque, your headquarter in London, on an appointed time of your conveneience to do face to face Mubahila with you. In the presence of four witnesses on either side and public we would DECLARE on Oath that according to criteria laid down by Holy Prophet Muhammad SAAW, Mirza Ghulam Ahmad, the founder of Ahmadiyya Movement, was a PERFECT HYPOCRITE. On the other hand we invited you to declare that your so-called Promised Messiah/prophet/mahdi had never lied, never embezzled, never broken a promise and had never resorted to foul language during an argument with his opponents. Mirza Tahir Ahmad! You were given 3 months to respond to it but you choose to ignore this Mubahila. Your silence on this was an admission of your guilt. Don't you think so?

[Note: According to Hadith of Bukhari and Muslim, if follwoing four habits are found in a person then he is a PERFECT HYPOCRITE:

When he is entrusted, he embezzleswhen he talks, he lieswhen he promises, he reneges on it &when he quarrels, he abuses.

In May 1995 AAMI again challenged you for Mubahila. Once again we offered to come to your HQ, AlFazl Mosque, in London on a time of your convenience for this Mubahila. In the presence of four witnesses from either side and public we offered to Declare on Oath that in the light of his writings Mirza Ghulam Ahmad has committed Worst kind of Blasphemies against the Holy Prophet Muhammad SAAW. You on the other hand would declare on Oath that your founder, the so called messiah/mahdi/prophet was an AASHIQ-e-RASOOL, a devout servant of Holy Prophet SAAW and has never Blasphemed the Holy Prophet.

Once again you chose to remain silent. Were you scared or admitting your guilt? Decide for yourself. 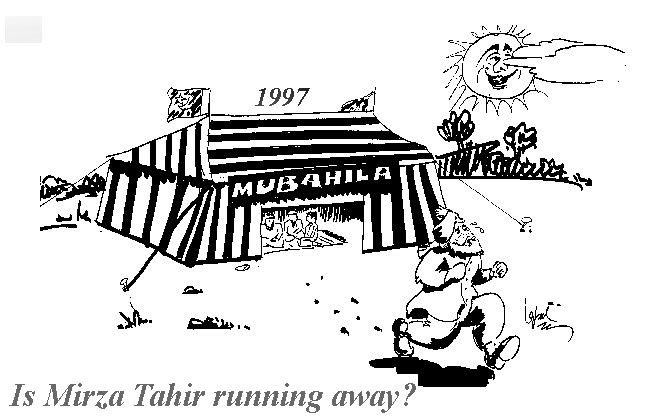 Will Mirza Tahir Once Again Run Away?

Everything must wait its turn. We waited patiently for an oppurtune time. Your first mistake was the Mubahila of 1988 and fortunately for us, you have now committed another blunder. At last on 10th January '97, you have reiterated your Mubahila of 1988, declaring that General Zia-ul-Haq died in the plane crash due to your first Mubahila which became a sign of your victory and a proof of truthfulness of Ahmadiyya Movement. You challenged all Enemies of Ahmadiyyat to accept this challenge of Mubahila.

I, Dr. Syed Rashid Ali, accept this Challenge of Mubahila on behalf of the Entire Muslim Ummah and on behalf of Anti-Ahmadiyya Movement, to prove that Mirza Ghulam Ahmad Qadiani, the founder of Ahmadiyya Movement was a Liar, an Apostate and a Perfect Hypocrite. Kindly inform me the place and time of your convenience for this Mubahila. How about HYDE PARK, London or your Headquarter at alFazl Mosque in London? Both of us will sit face to face with each other and invoke the Curse of Allah on Liars and pray that the Liar should die within one month.

Mirza Tahir! you will declare on Oath that your founder and prophet, Mirza Ghulam Ahmad was truthful in his claims of being a Messiah, Mahdi and Prophet and that General Zia-ul-Haq died as a result of your Mubahila of 1988.

I think now it is appropriate that I should say a few words about Mubahila for the significance of those who do not know what it is. Mubahila is a Quranic and Prophet's way of seeking Allah's judgement between two opposing parties. When the Christians of Najran came to al-Madina al-Munawwarh and after lengthy discussions did not accept the Prophethood of Holy Prophet Muhammad SAAW, Allah revealed the following verse to the Prophet:

"And whoso disputeth with thee concerning him, after the knowledge which hath come unto thee, say (unto him): Come! We will summon our sons and your sons, and our women and your women, and ourselves and yourselves, then we will pray humbly (to our Lord) and (solemnly) invoke the curse of Allah upon those who lie." (al-Quran 3:61)

Next morning Holy Prophet SAAW gathered His family (Syedna Ali Bibi Fathima, Syedna Hasan and Syedna Hussain {May Allah be pleased with them}) and sat in the Mosque and called the Christians of Najran to come for Mubahila. Upon seeing the faces of Holy Prophet SAAW and Ahle Bait, they refused to do Mubahila and accepted to pay Jizya tax. (Sahih Muslim, Tirmidhi)

At least one thing is clear from this tradition of Holy Prophet SAAW, that both parties should sit face to face with each other. This is the Sunnah of OUR Holy Prophet. Ironically your so-called prophet, Mirza Ghulam Ahmad, also followed the same practice. Read the following quotations from the books of Mirza Ghulam:

"So now get up and get ready for the Mubahila ....And it will be like this that after FIXING the DATE and PLACE of Mubahila, I will take in my hands all those INSPIRATIONS/WAHI which I have written and ENTER the place of Mubahila." (Roohani Khazain vol: 11, p.65)

"Secondly, when we went for Mubahila, our elder son was extremely ill and a serious sickness had afflicted him. We did not care for it and travelled in the same condition. But after that Mubahila, God cured his illness." (Roohani Khazain vol.9, p.33)

Mirza Tahir Ahmad! If not the Quranic Injunctions and the way of Holy Prophet Muhammad SAAW, at least relive the sunnah of your prophet. Or else tell the world that your Prophet/Messiah (Mirza Ghulam) did not understand Quran and Hadith as well as you do. I am sure that if in your heart you really believe in the truthfulness of Mirza Ghulam Ahmad Qadiani, you will not hesitate for a moment to come face to face with us for this Mubahila. We on our part are willing to lay down our lives to protect the Honour of our Beloved Prophet Hazrat Muhammad SAAW. Are you also willing to stick out your neck for the honour of Mirza Ghulam? Come on Mirza Tahir. Be brave! Across the world 10 million Qadianis are watching you expectantly.

Back to Home Page